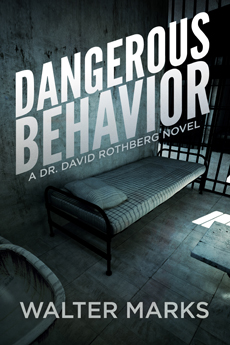 After fifteen years in solitary confinement, Victor Thomas Janko—the notorious Baby Carriage Killer—has become eligible for parole. And it is up to Dr. David Rothberg, the new prison psychiatrist, to determine whether Janko should be released.

As David finds himself drawn into the psychological quicksand of a disturbed inmate, his manipulative girlfriend, and a brutal guard, David needs to confront his own demons as he decides if Janko deserves a second chance. This high-voltage thriller will keep you at the edge of your seat and guessing until the very last page.

After fifteen years in solitary confinement, Victor Thomas Janko, known as the infamous Baby Carriage Killer, has become eligible for parole. As the unseasoned psychiatrist Dr. David Rothberg strives to determine whether Janko “if released would behave in a manner dangerous to others,” he finds himself drawn into the psychological quicksand of a disturbed inmate, his seductive, manipulative girlfriend, a brutal guard, and the complex environment of a maximum-security prison. David has his own demons as well, which ramp up the tensions in this high-voltage thriller.

“Smart, suspenseful, and edgy, with a shock of an ending that caught me totally by surprise.” —  David Morrell (author of  “Rambo: First Blood” and “Burnt Sienna”.

“Dangerous Behavior” is lightening-fast, filled with terrific psychological tension. From the opening twist to the very end you’ll be hard-pressed to put it down.     — Eric Van Lustbader (author of Jason Bourne series, Jack McClure series).

Paramount Pictures has bought the rights to the psychological thriller “Dangerous Behavior,” which has been compared to the Richard Gere film “Primal Fear,” — Variety