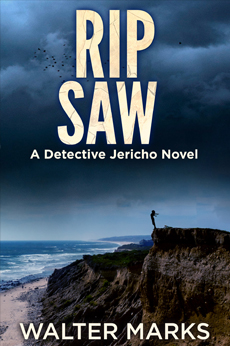 A crisis unlike any other that Detective Jericho has faced. Is it a terrorist or a homicidal maniac who is taunting the cops and leaving clues that lead nowhere? In a world where terrorism has become commonplace, these gruesome acts put the whole town of East Hampton on edge. Jericho and Detective Vangie Clark team up to stop the sadistic cop-killer reveling in these horrific crimes. And in doing so, they put their own lives in terrible jeopardy.

In this pulse-pounding police procedural, the eighth entry in Marks’ series set in East Hampton, New York, Detective Neil Jericho must outsmart a cunning serial killer who always seems one step ahead of the cops. When police officers are found executed in gruesome ways suggested by the novel’s title, the detectives’ suspicions turn to ISIS -- or even one of their own. Dogged Jericho eventually begins to think of these angles as red herrings as glimmers of more complex motives emerge. He's hampered by colleagues who keep their own secrets, and he underestimates his quarry with near-tragic results. In the end, this case will push him to summon resources he didn't know he had.

Marks has the procedural down pat, right down to interdepartmental tensions, the laconic detective’s differences with his ex-wife, and much snappy "cop speak": When Jericho points out that public beheadings still occur in some countries, his partner comes back with "That's entertainment." Marks also deftly addresses law enforcement racism, which helps make even some unlikable characters fully dimensional. His cool understatement makes the killings even more chilling than if they’d been graphic. Occasionally, he slips: A sex scene is gratuitously vulgar, and a description of a female character's looks as "cosmetic surgery miscalculations" falls flat. But those are exceptions in a disciplined novel that rarely falters.

While taut, Rip Saw doesn't neglect characterization. Jericho awkwardly balances fatherhood duty, and his relationship with his partner Vangie comes across as smooth and natural. Unlike Jericho, Vangie is in a happy marriage, and Marks writes warm and believable exchanges between her and her wife, Ingrid. Even the culprit has a complex backstory that elevates their humanity. Reader investment in these characters makes the masterfully plotted denouement all the more tense. With plot turns that surprise and a continual series of cliffhangers, readers will be breathless—and eager for the next installment.

Takeaway: Appealing sleuths, snappy dialog, and a tense plot that moves at light speed make this mystery a must for fans of the classic police procedural.

Production grades
Cover: A-
Design and typography: B+
Illustrations: N/A
Editing: B
Marketing copy: A-